The Real Money Is Over Seas For WNBA Players 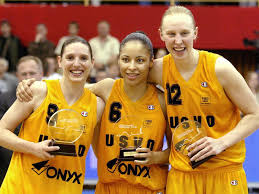 There has been a lot of recent talk about trade deficits and the decline of manufacturing, but it safely can be said that there is one area in which the United States is a leading exporter.

Each fall there is a huge transfer of talent from the United States to teams in Korea, China, Turkey,Russia ,Italy and a host of  countries in  Asia and Europe.According to WNBA.com around  63 or more players representing all of the WNBA’s teams are plying thire trade  overseas,  In other words, slightly more than half of the players in the league spend the “offseason” playing basketball somewhere else.

It’s not only journeymen who go. It’s many of the WNBA’s best players, such as 2016 MVP Nneka Ogwumike of the Los Angeles Sparks. Ogwumike  recorded one of the best seasons in the history of the league, making 66.5 percent of her shots in the 2016 season, the second highest in league history, and hitting the winning basket in Game 5 against the  Minnesota Lynx as Los Angeles won the WNBA title.

Just 12 mere days after hitting the most important  bucket of her career, Ogwumike was playing her first game with Dynamo Kursk in Russia.

Can you see former NBA MVP Stephen Curry packing up for Russia less than two weeks after playing in the NBA Finals? Hell no!. 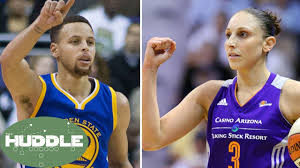 Most elite WNBA players can garner  about 15 times more from their overseas teams than they do in the  WNBA . Diana Taurasi, for example, makes $1.5 million from her Russian team, enough that she infamously chose to skip the 2015 season after she was asked to do so by the team, UMMC Ekaterinburg.

Why are overseas teams able to pay women’s basketball players so much more than they are paid here? There are a variety of reasons, according to Allison Galer, that  represents eight WNBA players and some  non WNBA players overseas.

Some teams, like most of the teams in Russia, are under pinned  by the municipal governments finances to serve as a source of pride locally . While the  Turkish clubs, are attached to major  lucrative men’s soccer clubs. “It is quite exhausting, though, to jump from one season to the next and have to reset your life, but it’s a part of the process and still is, nevertheless, a blessing we get to work jobs we love,’’ Ogwumike said in a recent interview via email. “In a calendar year, we play about 80, 90 games. I don’t worry about playing year-round because I won’t be doing it every year. It’s the sacrifice you’ve seen many take The WNBA has had an increase in attendance and television ratings and had its most exciting final round in years. It is by far the most successful women’s sports league in America. The newly formed national women’s hockey league, by contrast, has had to  announce that they were going to have to slash salaries by 50 percent in order to stay in business. Yet we still are in a awkward position in the evolution of women’s professional basketball. Players for the most are happy to have the opportunity to make big money overseas, though  they also prefer that  they didn’t have to go abroad to do that. 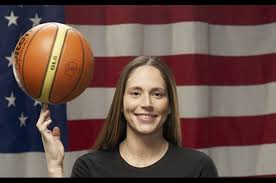 Ogwumike, who is the current  president of the WNBA’s players’ union , has empathized that she is bothered by the pay disparity between women and men  .

“Though we would appreciate more economic advances, it doesn’t disregard my appreciation of the opportunities I’ve had to make great money overseas or the cultural experiences that contribute to my worldliness as an athlete and a person . . . The disparity is obvious, apparent and no secret. But our league is still young and we have a lot of growth I look forward to being a part of, and very soon.”

While the economics are not there to pay women anywhere near what men’s basketball players make, should the MVP of the NBA make about 104 times more than the MVP of the WNBA?

The WNBA is easily the most competitive women’s basketball league in the world, even if it’s not the highest-paying. That, and a sense of loyalty to growing the game, likely is what keeps scores of the best female talent from abandoning the league and playing only in Europe, as Taurasi did two years ago. One has to wonder if that always will be the case

According to WNBA.COM, more than 60 of its players are competing professionally around the world this offseason, from Turkey  to Russia  Australia  to China, South Korea to Israel, and many other countries.

In addition to the experience, money is a major reason so many WNBA players compete abroad during the league’s offseason. Foreign teams often pay more than WNBA teams. Some top players can earn hundreds of thousands of dollars abroad — Diana Taurasi agreed to sit out the 2015 WNBA season to earn around $1.5 million during Russia’s 2015-16 season — but the WNBA maximum salary was $111,500 in 2016 and the average was around $75,000.

“It used to be that the money was in Italy, Spain, Russia — it used to be everywhere,” Harding said. “But now Russia and Turkey and China are the three places that have a lot of money for women’s basketball. Korea is pretty decent, but Russia and Turkey is where a lot of the money is. A lot of WNBA players  are in Turkey. Not just first division but also in second division, where they have a lot of money.”

Reason for  the high salaries? The teams do not make a lot of money themselves  but the wealthy owners simply want a  roster with supreme quality. Taurasi said  about Russian oligarch team owners back in 2007: “They’re hotheads who want the best women’s basketball team, and that’s their hobby, so they don’t care how much they pay.”

Seattle Storm and former University of Connecticut star Breanna Stewart, who is playing in the Chinese league with the Shanghai Baoshan Dahua this year, says the financial environment is completely different overseas.

“Obviously, these clubs have more money than what the WNBA team’s cap space is,” said Stewart, adding that her team has mostly played to sellout crowds. “The WNBA salary is not moving, at all. When you are overseas you have the ability to negotiate with what you want, what the team wants and that kind of thing.” 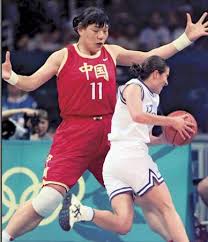 Low payroll funds aren’t the only potential drawback to playing overseas during the WNBA’s offseason. The nearly year-round grind can take a toll on players’ bodies.

Looking back at Stewart’s  2014 year. Joined the Storm shortly after completing her college career with a fourth consecutive NCAA championship. After the first part of the WNBA season, she went to Rio with the U.S. Olympic team and won a gold medal, and then finished the Storm’s season, which ended with a playoff loss in September. Two weeks later she headed to Shanghai.

Stewart is fortunate that China’s schedule is shorter than in most overseas leagues. The Turkish league regular season, for example, runs until April 8.

We may play that amount of games, but we don’t get time off. If you’re lucky, you get a week off after playing overseas to start in the WNBA and maybe a week off to go back overseas.”

“Most people, even my teammates, English is a language they took in school,” she said. “It’s great to walk in somewhere and ask, ‘Do you speak English?’ and most of the time they say, ‘A little bit.’ My little Turkish and their little English, we can work it out.”

Stewart, who has an intepreter with her much of the time in China, says language is more of a factor there. Her coach is Korean, and all her teammates are Chinese because only one foreign player is allowed per team.

“I don’t do well with time change here because a lot of my family and friends in the United States are awake at a certain time, and I’m always up late talking to them,” she said. “So I go to bed very late here.”

There also are serious security concerns in some parts of the world. According to the Associated Press several American women who have  played in Turkey, were alarmed by terrorist attacks and unrest in the region, are rethinking their decisions to play there. While there has been  some safety concerns — the WNBA provides a security app for players, and players keep each other informed of anything that might be going on .

“The only issue is that recently, and I mean in the past couple years, is the frequency of the [terrorist] attacks that have happened here and are very unfortunate.”

Swords says that in addition to what she has learned about language, people and culture, playing abroad has made her a better basketball player.

Every player would love to just stay in the states and play one season and one season only and have an off season where they could get to work out really hard with some trainers and a nutritionist like LeBronThere’s no break. I think that would be great if somehow someway they could figure it out where we can just stay here. It would help with the wear and tear on bodies. And it gets harder as you get older.

Not only do WNBA players not have the kind of offseason break that NBA players get to enjoy, the two leagues also have very different pay models.

Forbes magazine had a  salary breakdown of WNBA and  NBA players,who  enjoy about 50% of league revenue while it’s estimated that WNBA players receive less than 25% of the revenue. Average salary in the WNBA starts at  $50,000 and caps at $110,000 for the good players. In comparison, the average starting salary for NBA players is about $550,000.  WNBA Most Valuable Player, Sylvia Fowles, only made $109,000 for a season is on  on the higher end scale of pay.  WNBA superstars like  Diane Taurasi and Fowles earn just 20% of an NBA superstar’s salary.

If you consider yourself as a passionate online shopper like myself,Ebay has amazing  deals on the best products.I hoped you enjoyed the WNBA Women Basketball Players-The Real Money Is Over Seas For WNBA Players article and if you have any  questions and  want to leave a comment or want to leave your own personal review,please leave a comment below .