After Playing Basketball, Then What?

The WNBA players don’t have the benefit NBA players enjoy getting paid in the millions . Meaning that most WNBA players will have to look for something else to keep them busy the rest of the year. Most of the players choose to go and play overseas.

For a good deal of  WNBA players, the end of league play means a quick break before heading overseas to play even more basketball until the WNBA season starts going  again in the spring season. But some players either squeeze in other activities prior to heading out to their other teams or decline international play altogether.

Some Players Can Earn Alot More Overseas Than In The WNBA

NBA players get to enjoy off their season break .WNBA players do not have the kind of that luxury however .These two leagues also have completely different pay models.

According to a Forbes magazine salary breakdown ,NBA players enjoy about 50% of league revenue while it’s estimated that
WNBA players receive less than 25% of the revenue. The average salary in the WNBA starts at around $50,000 and caps at $110,000. By comparison, the average starting salary for NBA players is about $550,000. Last year’s WNBA Most Valuable Player, Sylvia Fowles, only made $109,000 for the season  and that’s on the higher end scale of pay. To put it in perspective, WNBA superstars like Sylvia Fowles and Diana Taurasi earn only 20% of an NBA superstar’s salary. Overseas, Taurasi makes 15 times as much. And WNBA players in general make at least three times more from their foreign teams than their average WNBA salary.

Some players decide to take a whole different other job in the off season.

Chiney Ogwumike gets to take a break from having two full-time jobs and concentrate on her ESPN duties where, she’s an NBA analyst.

Skylar Diggins-Smith is a “Her Time to Play” ambassador:

Renee Montgomery participated in Jr. NBA Week, coaching girls at the Her Time To Play camp in Atlanta. She also recently shared her off season workout routine  with ESPN. 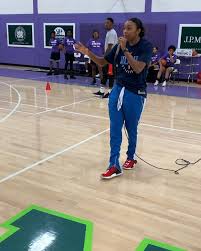 Marissa Coleman  of  the New york Liberty  has a Mellow Mushroom pizza franchise that she co-owns  together  with the LA Sparks’ Alana Beard. Coleman also took part in Harvard Business School’s Crossover Into Business Program in the spring, which several WNBA completed this past  fall  season . At the beginning of her career,Lindsay Whalen usually  went overseas in the off season, and played in the Czech Republic,Russia,and Turkey . But now, 15 years into her WNBA career with the Minnesota Lynx, she decided to become the head coach for Alma  Mater ,the University of Minnesota.While still  playing  for the Lynx. Whalen played for the Golden Gophers during her college years, she still holds several records for the school and her jersey number has been retired.

In  2017, Briann January became the assistant coach for Arizona State’s women’s
basketball team, a job she would fulfill during  the WNBA basketball  off season. January a former player at ASU who  still holds the record for assists and free throw percentages. This isn’t her first coaching job, as she was a volunteer assistant coach for the Adelphi University women’s basketball program, a Division II school, in the 2013-2014 season. This will also be the first year that January will not play for the Indiana Fever, the team that drafted her in 2009, but for the Phoenix Suns, as she was traded during  the off season. When Tamika Catchings purchased  Tea’s Me Cafe, WNBA fans have flocked to the north side of Indianapolis to catch a glimpse of its famous owner.

Though she never expected to go into the restaurant business, Catchings  started planning for a post-WNBA career long before she retired in 2016.Some players find that second act in coaching or broadcasting. Others, though, choose paths that carry them far from the gym into life after a basketball  career  is finished

Tamika Catchings, a former star of the Indiana Fever, poses for a portrait inside Tea’s Me Cafe in Indianapolis in 2017.

The WNBA, NBA and G League now offer a variety of post-basketball training opportunities through their “Career Crossover” initiative. Some of the leagues’ corporate partners invite players to do job shadowing.

There is an apprentice program in which former players work at the NBA’s  New York headquarters for a year, with some earning full-time jobs there.

The WNBA Will Always Be In Theire Hearts

The WNBA will always be part of them, Catchings said. But she hopes every player understands that life can be even better after basketball.

“There are thousands of former pro players who have no idea where they are and what they’re doing,” Catchings said. “Some might be saving the world, for all we know. It’s just so cool to hear all the stories about what people plan to do next.”

We’ve really increased our focus on how to support athletes as they transition, said Bethany Donaphin, a former WNBA player who is now head of league operations. Whether you’ve prepared for a long time or not at all, when you stop playing, it is a shock.  The WNBA has  put resources in place to allow players to do that more easily.

Running her foundation  Catch The Stars, which serves underprivileged youth taught Catchings some basic business acumen. She has also found the interpersonal skills she honed in the WNBA have translated to the tea shop.

Catchings is a better boss because she knows how to communicate, resolve conflicts and lead a team. The patience learned in the league will help players to better cope  with negative and positive situations .WNBA has  instilled fearlessness and perseverance to come in handy when  launching new business venture concepts.

If you consider yourself as a passionate online shopper like myself,eBay has amazing deals on the best products and exercise equipment . I hoped you enjoyed the WNBA Players Off season-Best Side Jobs article and if you have any questions about the post want to leave a comment or want to leave your own personal review, please leave a comment below thank you.