When asked by the Under Armour brass what theme would NBA basketball star  Stephen Curry would  like to see on his Curry 6 signature shoes.Curry responded and said “We have to do something “For The Town.”

Dubbed “Fox Theater,” this  first 2019  colorway pays homage to the Golden State iconic landmark it seems the two-time NBA MVP has opted to continue with an in-trend, lower profile model. The shoe’s upper is made from a black knit material, accented by vibrant neon hits of green, yellow, and orange throughout the sneaker. Like all of Curry’s signature sneakers, the SC30 logo remains intact, this time placed on the lateral side of the midsole. Under Armour’s shield branding hit is located on the tongue and heel portions atop the brand’s new HOVR cushioning technology.

As  the Golden State Warriors NBA basketball team prepares to move from the Bay in  Oakland to San Francisco ,California.Curry knew beforehand  that during the 2018-19 season, that  he would  be wearing Curry 6 his  sixth signature kicks.It is set to be the season  at Oracle  Arena where  the fan atmosphere  can tend to be a little bonkers and raucous during  ball games to say the very least.

Just as the Curry 6 was being prototyped and developed, Under Armour opened a 70,000-square-foot design and innovation center in Portland, Oregon — just a 90-minute flight from Oakland. Curry was able to fly in on off days and during the off season to have his movements tracked by the brand’s high-tech motion-capture system.

They found that Curry changes direction on the floor at least every two seconds and runs nearly 2½ miles per game, placing him in the 95th percentile in the league.

“We wanted to design a shoe that was more like a running shoe for him,” said one of the  Curry 6 shoes designers .

That all led to a lighter look, more multidirectional sculpting along the bottom, and the largest speed plate in his shoes yet — technology aimed to propel him forward throughout the course of a game.

“It actually encourages me to run more,” Curry said. “If I was doing that before we had addressed it from an innovation standpoint, now with the 6, I should be even more lethal, whether I have the ball in my hands or not.”

When he recently debuted the sneaker on the cover of SLAM Magazine, he insisted on not posing solo, and instead was flanked in front of the downtown Fox Theater by several pillars of the community. Local students joined in, along with Warriors 1975 championship head coach Al Attles, several of the city’s powerhouse high school basketball coaches, his local barber Yusef Wright, boxer Andre Ward and rapper E-40.

“The diversity of Oakland is crazy, and you get people from all walks of life,” Curry said. “It’s just like a vibe that you can’t really explain. They know how to have fun, they know how to support each other. The way that Oakland has a bad rap nationally, if you look at people from there, there’s nothing better than somebody from Oakland.”

“He’s meant hope, happiness and pride for this town,” said Kris Stone, Under Armour’s senior director of sports marketing, who was born and raised in the Bay. “Growing up here, I can truly understand the impact he has made over the years. Knowing Stephen, his love for Oakland and commitment to The Town will be everlasting, regardless of where the team plays in the future.”

While Curry plans to release a batch of colorways that highlight stories from different chapters throughout his 10 years in The Town, the overall design of the shoe features a variety of subtle nods to Oakland. The lattice graphic of Oracle Arena’s ceiling architecture is mimicked both along the shoe’s arch support and the shoe box lid.

“The atmosphere at Oracle is so unique,” Curry said. “From my first season in the league, we didn’t sell out crazy, but there was a different energy. As we’ve gotten better, every single game that intensity is only amplified by how many people are in the building, every single night.”

As he spent the past two years thinking ahead to this moment, the exercise also allowed Curry to reminisce and reflect on some of his career highlights, including the first time he reached the postseason with the Warriors in 2013.

“It was just a shift in our expectation as a team,” Curry said. “We were playing the Phoenix Suns, and we knew what our magic number was to clinch a playoff spot for the first time since the ‘We Believe’ team.”

As then-coach Mark Jackson entered the locker room to address the team after the win, his calm speech caught the players by surprise, only for Jackson to quickly break character and get on with the celebration.

“Congratulations, fellas — we made the playoffs!”

“He took a bottle of water and poured it on his head,” Curry said. “There was a table of bottled water next to him, and everyone ran to go get one and we were spraying it around like it was champagne. That was the sign of many great moments to come.”

The memory is one of many that might find its way onto Curry’s footwear this season. For the Warriors, it was a sign of things to come, as real champagne was flowing just two seasons later.

“Our first parade was a symbol of what Oakland is all about. There was a lot of talk about where we were going to have the parade — was it going to be San Francisco or Oakland, or a little bit of both?” Curry said. “To have it in Oakland, and a community that supported us through some dog years forever, to show out like that, bring that excitement, bring that passion and bring a love — that was so amazing to see.”

With the Warriors yet again expected to be near the top of the league heading into the playoffs, Curry is hoping to pull off one last Oakland-era championship, fittingly for The Town.

“When it comes to our legacy in league history … it cements the Bay as a basketball city,” Curry said. “Why not consider us one of the all-time great basketball cities that hosted one of the greatest teams of all time, for however long this run lasts?”

Free Party At Fox Theater In Oakland Thrown By Curry 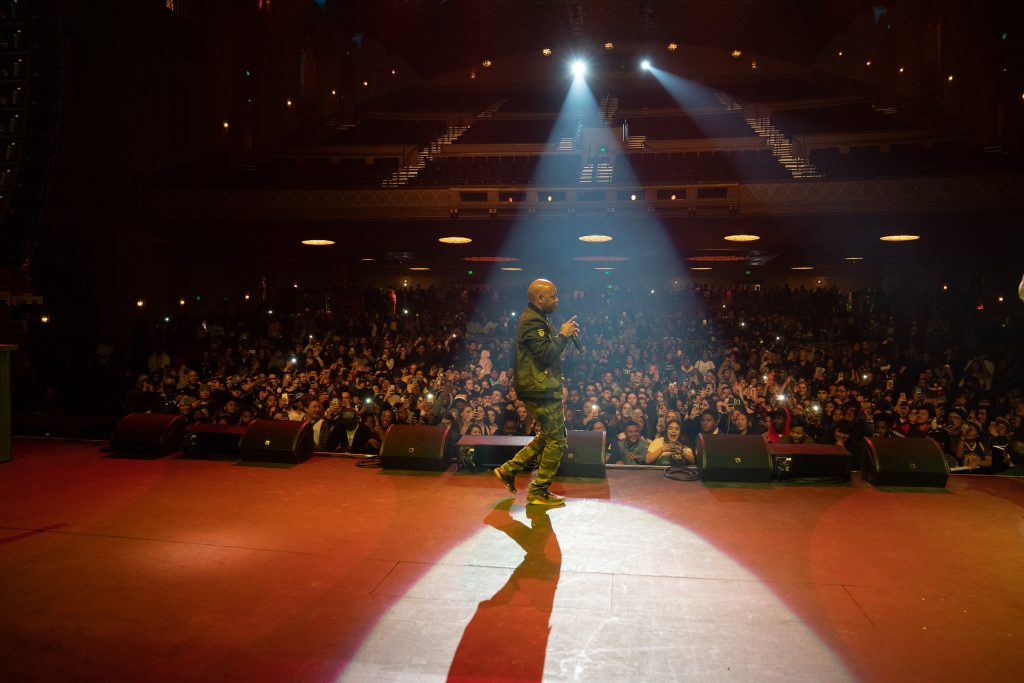 Steph Curry was in the building on Friday, and he was likely feeling himself, as he celebrated 10 years in Oakland and promoted his Curry 6 Fox Theater colorway Under Armour shoes. Curry threw a free party at Fox Theater in Oakland featuring performances by legendary Bay Area rappers E-40 and Mistah F.A.B. (and other surprise guests), along with upstart rappers Saweetie and P-Lo.E-40 and Mistah F.A.B. were on the bill for the celebration, but Too $hort and MC Hammer were surprise guests at the event. Too $hort came out before Mistah F.A.B.’s performance and Hammer came out during it.There were lines around the block as fans of Curry waited to get into the Fox. Curry hosted the event, but the emcees were Sway Calloway, the Oakland native and former local DJ who now hosts shows on SiriusXM and MTV, and Ruby Lopez, a local television host.
Curry gave out tickets for the party on Jan. 3 at a pop-up shop he held in Downtown Oakland and Bay Area radio station KMEL gave out additional tickets.He also invited girls basketball teams from all over the Bay Area to attend the event. Girls from Carondelet High School in Concord, Richmond High School in Richmond and Notre Dame High School in Belmont were among those that attended.

The young basketball player wrote a letter to Curry last month. She wanted him to know that she couldn’t find his Curry 5 shoes for girls on the Under Armour website.

The NBA star  promised he  would correct the exclusion of girl basketball shoes sizes  and he did. Shortly there after to theire credit Under Armour and Steph Curry made the  basketball  sneakers  available to girls online.

Her dad had kept them under wraps until Christmas. It’s something Riley figured out pretty quick and appreciated.

“Were you waiting ’til Christmas to give me these?” she asked.

When her father said yes, Riley said “smart, smart,” with a smile.

This particular colorway of the Curry 6 is considerably special because it is a collaboration between Stephen, Under Armour, and sneaker customizer Devlin Braswell (aka Dee-Nyce) and his Fly Boys Couture Club class, which inspires youth to join the the world of sneaker and fashion design. Ages 8 to 13, Dee’s FBCC kids looked to Lake Tahoe as snowy inspiration for the shoe, opting to go with a white upper and blue midsole that points to the white snowcaps of surrounding mountains floating above the icy blue lake. From there, the Curry 6 welcomes unique snowflakes representative of each child in the class, implementing them on the sneaker’s sole. The insole features snowflakes as well, drawn by the kids, in addition to a holiday-themed Oakland tree.

Buy: Under Armour sneakers are available  online  at eBay.

This Under Armour   latest colorway of Stephen Curry‘s new signature sneaker, the Curry 6. The “Christmas in the Town” iteration is not only a nod to the holidays, but also Steph’s ties to the city of Oakland.

If you consider yourself as a passionate online shopper like myself, eBay  has amazing  deals on the best products.I hoped you enjoyed the Stephen Curry Kids-Under Armour Sneakers article and if you have any questions want to leave a comment or want to leave your own personal review,please leave a comment below .