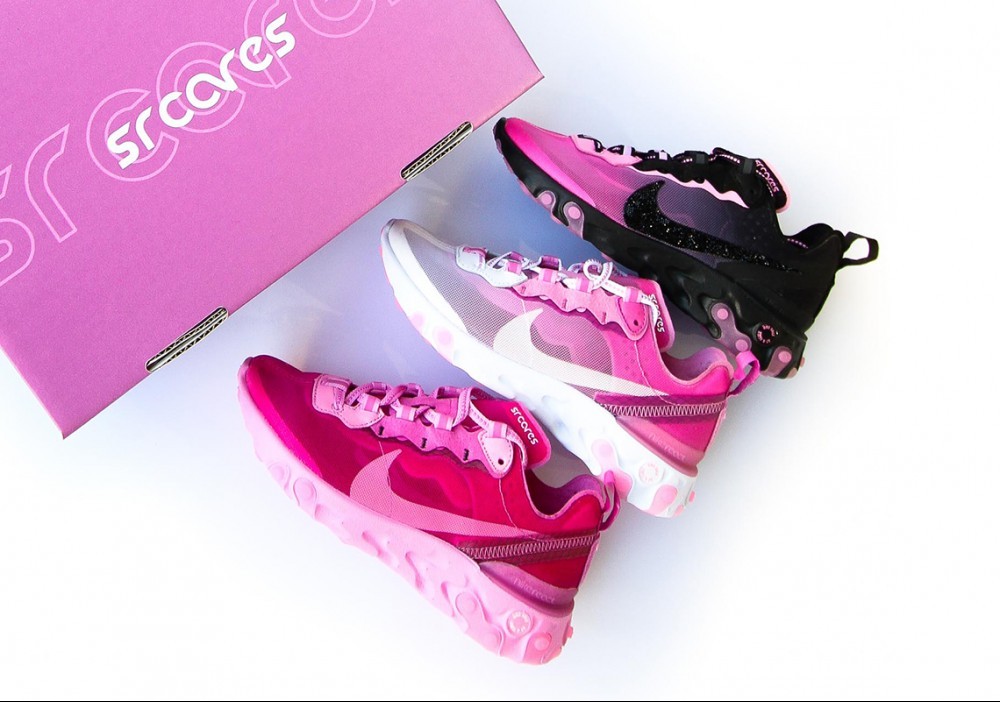 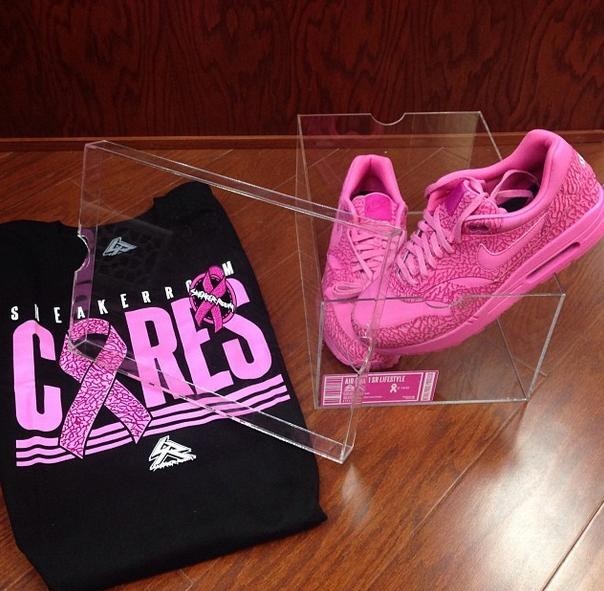 Sneaker Room and Nike have teamed up to celebrate Breast Cancer Awareness during the month of October with three special color optionsof the React Element 87.

All three limited Nike React Element 87 styles feature special detailing on the pod with the Sneaker Room “SR Cares” slogan
“Changing the world one sole at a time.” These kicks  will be decked out in  Swarovski crystals on the Swoosh made famous by Nike
They will come in Pink/Pink, White/Pink, and Black/Pink colors .

Look for these Sneaker Room x Nike React Element 87 styles to release to the public in extremely limited quantity releasing
on September 28th exclusively at Sneaker Room in-store and online. All proceeds will be donated to the Jersey City Medical Center for breast cancer research.

The range features hand-drawn illustrations depicting diversity. They drop Sep 25, 2019 in honor of Breast Cancer Awareness Month, Vans has teamed up with CoppaFeel! on a limited-edition footwear collection. The forthcoming lineup includes an Sk8-Hi trainer, two low-top Slip-On designs, an Era model and also a slide silhouette. The range isn’t just for show, it was designed to “educate youth on
checking their breasts and early detection.” It also centers “the beauty and strength of those impacted or touched by breast cancer,” according to an official press release. Each design comes with diverse breast illustrations which speak to the numerous appearances of breasts andnipples depicted in different shade ranges.

Early detection methods improve breast cancer survival rates, and Vans’ goal is to create awareness about a disease that affects everyone. Vans  will donate a minimum of $200,000 of its proceeds1 from this collection to CoppaFeel!, a UK-based organization2  dedicated to educating young people on boob checking, the signs and  symptoms of breast cancer, and empowering them to speak up when any  changes are noticed.

What happens at 23? Well, if you’re lucky, seeing a bit of the world, brunching with mates and a whole load of carefree fun. And if you’re less lucky? Breast cancer.In 2009 that is precisely what happened to Kris .

Founded in 2009 by both twin sisters Maren and Kristin Hallenga  .CoppaFeel! co-owner Kris was diagnosed with secondary breast cancer at the age of 23.

Following on after locating a lump at the tender age of  22, living abroad in China for 8 months and eventually visiting her doctor 3 times, Kris was told the news that she had incurable breast cancer. Kris was unaware that breast cancer could affect people in their twenties and knew very little about the disease. It struck her that there was very little information out there for young people, educating them about the disease, how they could be looking after themselves and informing them that breast cancer doesn’t just affect women over 50. Although Kris will always live with cancer, she wanted to get the message out there to young people that catching cancer early means you have a higher chance of surviving and recovering. She wanted people to learn from her story and become proactive about their own health status.

UK-based CoppaFeel! is a breast cancer awareness charity which helps to promote early detection and encourages young people to know and understand their bodies. $200,000 USD of the proceeds will benefit the charitable efforts to cure breast cancer.

Headlining the collection is the Vans Sk8-Hi which features the hand-drawn illustrations paired with a black and white design. Up next is the checkerboard Slip-On which arrives in a light cream tone with different shades of brown and white throughout. The third iteration is also a Slip-On in black with the phrase “YOU GOT THIS” on the top of the shoe. The last sneaker is an Era which also comes in a cream colorway with a literal blueprint design on the upper. The slide comes in white and features an assortment of colors on the strap.
In an official statement, Kris Hallenga, founder of CoppaFeel!, discusses the company’s partnership with Vans radical shoes company :
“For our charity, this collaboration with Vans is a dream come true. We are thrilled for the opportunity to spread our message across Vans’ audience, as this partnership will allow us to tell more people why checking their boobs is so important, and in return, save lives. CoppaFeel! exists to stamp out the late detection of breast cancer by educating everyone  that includes girls and also boy pals about boobs and encourage them to get anything they know who has anything abnormal checked by  by a Medical Doctor immediately.

Previously Nike had joined with  Sneaker Room to carry on its tradition of raising breast cancer awareness during the month of October. Normally executed using customization options on NIKEiD, the Swoosh has provided the New Jersey retailer with an assist to continue the positive cause. The Nike Air More Money hybrid is comprised of the Air More Uptemo‘s sole unit which supports the same upper found on 1996’s Air Money silhouette. Scheduled for a launch in 2018, the Sneaker Room was provided with early dibs in order to deliver three colorways of the sneaker.

Again all  are  available in limited numbers, its pink colorway retails for $180USD with 360 pairs made. Its white edition will be limited to 100 pair for $500 USD each while its black colorway will set you back $2,000 USD being the most limited at 40 pairs and will be accompanied by the two aforementioned styles.

The take off  launch is on October 30, 100% of the proceeds will be donated to benefit Breast Cancer Treatment and Research. The Nike Air More Money“BC” Pack will be available eBay

If you consider yourself as a passionate online shopper like myself,eBay has amazing deals on the best products.I hoped you enjoyed the Nike React Element 87-Nike,Sneaker Room, And Vans Joint Breast Cancer Awareness Collabos article and if you have any questions want to leave a comment or want to leave your own personal review,please leave a comment below .