Cameroonian national Joel Embiid, has come to be the face of the Philadelphia Sixers basketball team His playful demeanor beloved and world-class basketball ability has brought the Sixers to national prominence It is his commitment to the disenfranchised youth of Philadelphia that has endeared him the most to the community. Recognizing his connection to the kids and how they inspire him every night on the court.Joel’s custom UA Anatomix Spawn All-Star Game player exclusive shoes isn’t just for the kids – it was made by them.

Over the past few years, Philadelphia basketball fans have latched onto a saying: “Trust the Process.” And while the process of team building has built an NBA Championship title contender

Trust the Process actually shows up in a couple of unrelated books well before Sixers fans started saying it. Trust the Process was the title of a 1996 book on addiction recovery and a 1998 guide for artists. In any challenging project, it can help to focus on (trust) what you can control (the process) rather than the outcome.

The association of Trust the Process with basketball’s 76ers goes back to 2013. In May that year, the team’s new general manager Sam Hinkie stressed an on process over outcome in his first speech with the team. Under Hinkie’s leadership, the team traded away star player Jrue Holiday for Nerlens Noel and a first-round draft pick. This started an, ahem, process of tanking, or giving up short-term wins in order to get better draft picks in the future. Not everyone loved the idea, but some fans on Twitter started saying “in Hinkie we trust.”

In 2014, Hinkie used one of those draft picks on Joel Embiid, a player who, due to injuries, wouldn’t be able to play that season (and wouldn’t play in the NBA until 2016). Echoing Hinkie, Embiid encouraged fans to trust the process. Again, fans would have to wait for the payoff. Embiid became the player most associated with Hinkie’s process and even adopted The Process’s his nickname. 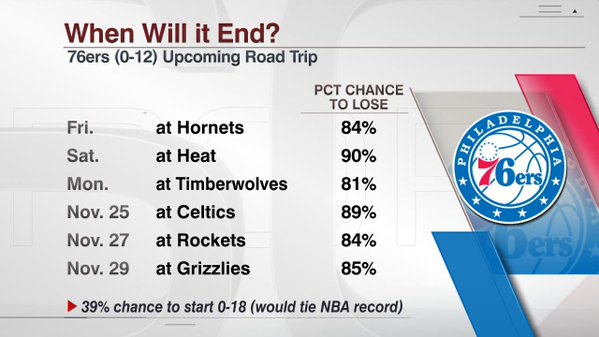 In 2016, the sports news site 12Up named the Sixers one of the six NBA teams with the best young talent, pointing to Embiid among others. In the 2017 season, they went 52-30, finished third in the conference, and went to the playoffs. Even without Hinkie around to see it, it seems like the process is finally paying off.

Coming  to America from Africa, you almost expect that everything is going to be so perfect  said Embiid . There is this  expectation  that most people have an comfortable  life living  in the States. Until when you  arrive  in  Philly see it it for yourself .

There’s a real struggle, too just like in Africa .I saw that there’s real poverty here, too.

This city has stood by me through all the injuries and all the pain. For years. Honestly, when I came back after being injured for two years, I thought I was going to get booed when I ran out of the tunnel. I literally thought y’all were gonna boo me out of the building.

But I didn’t get booed. And then when I scored my first bucket, the whole building cheered for me. That helped me a lot. People say crazy things about Philly, and some of them are kinda true, but the whole city has been behind me from Day 1. (OK, LOL maybe Day 2.)

Ya’ll trusted The Process. Y’all have had my back. Now I’m gonna do my best to have your back. I’m going to be working on some big things with Under Armour. I got a few surprises coming for the Philly community, and for the rest of the world.

Joel Embiid made his second straight All-Star  game starts  in Charlotte  2019. This time, he went all out with his footwear.

Embiid’s UA Anatomix Spawn All-Star Game player exclusive shoes were designed by footwear customizer Dez Customz, who went to the Boys and Girls Club of Philadelphia for input from the kids.

The right shoe includes the Boys and Girls Club motto, “Great Futures Start Here.” Per Under Armour, “the shoes feature Philadelphia landmarks and descriptors such as the City of Brotherly Love, the U.S. Constitution, LOVE Park, and more.” And the initials of every kid who participated in “The Process” of creating the shoes is on the heels.

The shoes  hi-lites the Boys & Girls Club motto “Great Futures Start Here” as well as their core values and a bronze graphic that ties back to the Boys & Girls Club of Philadelphia ceiling – a nod to The Process of growth that happens at the Boys & Girls Club and finding beauty within the struggle. There are Philadelphia landmarks and descriptors such as the City of Brotherly Love, the U.S. Constitution, LOVE Park, and more. The initials of each child who participated in the ideation process are included on the heels of the shoes – an opportunity for Joel to show the world the voices of Philadelphia youth, and to speak out and support them on the grandest stage.

The Under Armour Anatomix Spawn Features

Under Armour basketball dropped a shoe by the name of the Under Armour Anatomix Spawn  in 2013. When they dropped the shoe, Under Armour was just getting started in basketball. A younger  Stephen Curry  had  just joined up the UA teamwhile  shunning the mighy Nike in the process.Due to what Curry saw as a lack respect and being  not really coveted very much by the Swoosh.The  same year  Curry was making his  very first All-Star Game appearance, equipped with one of the most uniquely designed basketball shoes to hit the streets . Under Armour Anatomix Spawn however  became  a must have  pair of  kicks .

Fast forward it’s now  2019 and the Anatomix Spawn is returning, led by Joel Embiid. The new Anatomix Spawn is built for a totally all-around athlete like Joel a superstar as comfortable in the post as he is behind the three point line.

The 2019 version of the Under Armour Anatomix Spawn takes many cues from its predecessor. The upper design is directly inspired by the loud, psychedelic visual of the original Spawn. The flowing red and blue pattern on the upper are inspired by the numerous muscles, tendons and ligaments that make up the foot, calling back to the original ideation of the Anatomix Spawn. A sneaker  designed  around the anatomy of the foot as it contours  around it perfectly.There is  an improved version of Micro G cushioning feature with this lastest  Spawn shoe .

3D adaptive multi-level traction pattern provides unrivaled floor grip in any conditions via co-efficient friction, providing more strength than the original Spawn. The breathable vamp material offsets the TX/TPU layering on the upper, ensuring breathability without sacrificing stability and support. Internal counter pocket in the heel provides complete lock down for the heel, providing great foot  and ankle support. The Under Armour team added flexibility in the forefoot without losing stability, by adding lacing all the way up to the forefoot with a rubber wrap, ensuring maximum flex without the fear of rolling off the ball of the foot.

The Under Armour Anatomix Spawn Was launched  on January 26 Available Online At eBay.com

If you consider yourself as a passionate online shopper like myself,Ebay has amazing  deals on the best products.I hoped you enjoyed the Joel Embiid’s Shoes-Philadelphia Youth Helped Design NBA Star’s Kicks article and if you have any  questions and  want to leave a comment or want to leave your own personal review,please leave a comment below .