In 1997 Violet  Palmer and Dee Kantner  broke the NBA’s  officiating gender barrier . Palmer was the first woman to officiate an NBA playoff game in the April 25, 2006 match between the  New Jersey Nets and Indiana Pacers. Kantner debuted her NBA officiating career with a game between the Dallas Mavericks and the then Vancouver Grizzlies,who now are  the Memphis Grizzlies. She went on to officiate 54 games that season. Palmer(born July 20, 1964) is  retired she officiated in both the WNBA  and  NBA and the first female official to reach the highest competitive tier in any major U.S. professional sports league. She also earned recognition as a member of two NCAADivision II women’s championship basketball teams.

Concluding  19 years as a referee and battling with an annoying but very painful  knee injury.In 2016 Palmer made her retirement announcement.Being away from the  NBA officiating grind has allowed her to be present to revel in all of her accolades.

“Those years that I was in the NBA, it was like nonstop, a constant drive, traveling, living out of your suitcase all over the country,” described Palmer. “The scrutiny, it’s stressful and now I’m like, I can let my hair down.”

Now 53-years-old,Palmer, is the coordinator of Women’s Basketball Officials for the Pac 12 Conference, the West Coast Conference (WCC) and the Western Athletic Conference. 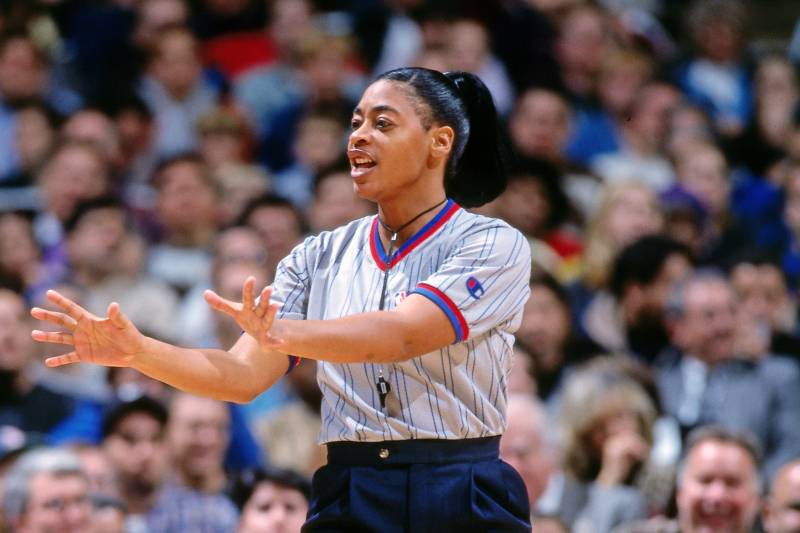 “Part of the satisfaction of earning this opportunity has to do with the fact that I’ve been able to stay committed to the work and put the work first and trust the system and that’s what matters,” Says Holtkamp “It doesn’t matter who is doing the work as long as the work is high quality. There is a great deal of satisfaction in that.”

Holtkamp is just one of three officials who made  the leap  from the NBA Development League to the top echelon during  the 2014 season. The other two refs who were males Dedric Taylor and Justin Van Duyne also joined Holtkamp on the 63-person roster that year .

She said she appreciates what Kantner and Palmer have accomplished. “There is a kinship and certainly a sense of support and collegiality.”

But Holtkamp is emphatic that she is a referee   first and foremost who just happens to be a female .

“I would say really from day one when I got hired into the D-League I’ve been treated as a referee as far as my performance,” she said. “It’s been about my performance and the quality of work.”

Ashley Moyer-Gleich  and Natalie Sago were the two female officials promoted to full-time .They are the fourth and fifth full-time female NBA officials in the league’s history, preceded by former officials Violent Palmer and Dee Kantner, and Lauren Holtkamp, who is currently officiating in the league on a full-time basis.

The new officials, all of whom have been working in the G League, are Ashley Moyer-Gleich, Natalie Sago, Mousa Dagher, Matt Myers and Phenizee Ransom.

The NBA released a statement  on the recently promoted five referees to full-time status, including the fourth and fifth women in league history to achieve full-time status.

“These officials have excelled in the specific performance areas that warranted working NBA games on a regular basis,” NBA vice president and head of referee development and training Monty McCutchen said in a release. “All five referees have achieved the pinnacle of their profession and will continue to work on their craft as they join the NBA officiating staff.”

All five officials will continue to also work in the G League, as, per the release, “all NBA referees with fewer than four years of service in the NBA work NBA G League games to gain additional experience as crew chiefs and develop as leaders.” 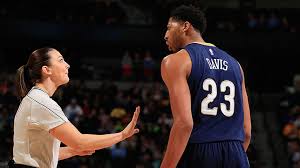 Structures between the NBA and WNBA are different and have very different ranges. Based on general information in the NASO offices, WNBA referee pay depends on years of service and estimates that it ranges from about $800 a game to $1,800 per game. Based on those numbers, over the course of a 34-game season, a WNBA official could hypothetically make about $61,200. Pay in the NBA is salary-based. Working a full schedule involves 82 games;  estimates the salary at roughly $120,000 to start, and salaries rise to well above $400,000 for the most senior referees 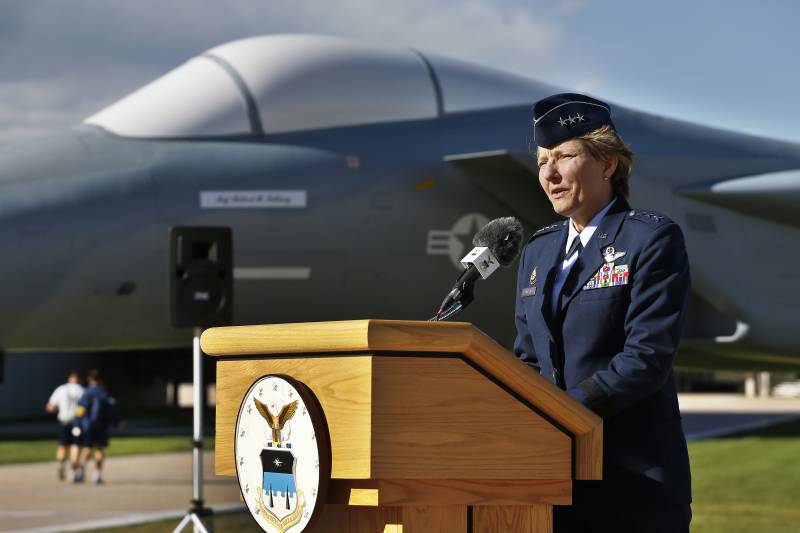 Has the NBA’s Effort to Hire More  Female Refs Stalled?

The first woman to lead the U.S. Air Force Academy, Michelle D. Johnson was hired by the NBA last fall to streamline its referee hiring processes. According to numbers provided by the NBA, 16 of the 65 referees (28 percent) in the NBA G League are women, and at the conclusion of the 2017 WNBA season, 12 of the 32 referees (37 percent) were women.

Recently installed to supervise the process is Michelle D. Johnson, the league’s new Senior Vice President and Head of Referee Operations, who was brought in last October to oversee officials in all three leagues, as well as focus on refining the scouting, development and evaluation processes.

Considering all the feel good feeling surrounding the hirings of  Palmer and Kantner back in 1997 .Currently just three women officiate in the NBA today—Ashley Moyer-Gleich ,Natalie Sago and Lauren Holtkamp. Now in her fourth season, Holtkamp started on her path to the NBA after playing Division II college ball at Drury University.

If you consider yourself as a passionate online shopper like myself,eBay has amazing deals on the best products and exercise equipment . I hoped you enjoyed the Female Sports Models -Honoring NBA’s Female Referees article and if you have any questions about the post want to leave a comment or want to leave your own personal review, please leave a comment below thank you.