Most rabid basketball fans are thrilled to get their hands on WNBA or NBA swag, but be mindful of cheap  jerseys. The WNBA and it’s partner the NBA are warning fans about knockoff merchandise that makes it tough to determine if your buying the real genuine  merchandise.

Michael Potenza, who serves as the Vice President and Intellectual Property Counsel for the NBA, indicates that  there a few things to look for when buying official gear.

Ways to Spot The Fakes

Look for an WNBA/NBA holographic tag or sticker on the product. The buyer should also look for the names of an WNBA and NBA licensee like 47,NewEra, or Nike Brand on the item .

Usually  when you buy an official WNBA or  NBA Jersey, you will either be buying an  Authentic Jersey  , an Repica Jersey or an Swingman Jersey, but what’s the difference between these three types? Let’s break it down so that you know exactly what you’re getting when you purchase one of these types of Jersey.

An authentic Authentic Jerseys is a real copy of the WNBA and NBA jerseys that your favourite players wear on the court. These jerseys replicate the same fabrics, trims, cuts and aesthetic details that you would find on the actual jerseys worn by the players.

They  have  a single, or multi layer twill word mark, players name, numbers and logos, and the material of the jersey will be heavier than either the replica or swingman jerseys. The  Authentic NBA jersey is the closest version to a original, NBA game day jersey. Taking into account with regards to  the materials used and  fine  detailing  that go into designing  a authentic  jersey, you tend to be looking at a high price tag. This is really true of the throwback  or retro Authentic jerseys that bring older NBA jerseys back to life .

A Replica jersey is the most basic type of fan jersey that you can buy. It has a very similar look and design to that of the WNBA or NBA jerseys that the players wear,  there are some important distinctions one should be aware of here.

Replica jerseys are screenprinted with a team wordmark, team logos and player name and numbers. WNBA and NBA Replica jerseys tend to be made of polyester mesh and have a wide shoulder, sleeveless cut. The broader  shoulder cut and simple screen printing are distinguishing features of a Replica NBA jersey.

Replica WNBA and NBA Jerseys are  the cheapest style of jersey and while they are still made of quality materials and well put together, they are still the basic model, so prices and the relative longevity are not quite the same as other jerseys .

Swingman  Jerseys are a step up from a replica  jersey. They more accurately copy the features of an on court  jersey and, in the case of Swingman  Jerseys for current WNBA and NBA  teams and players, will be made of a more performance based material. 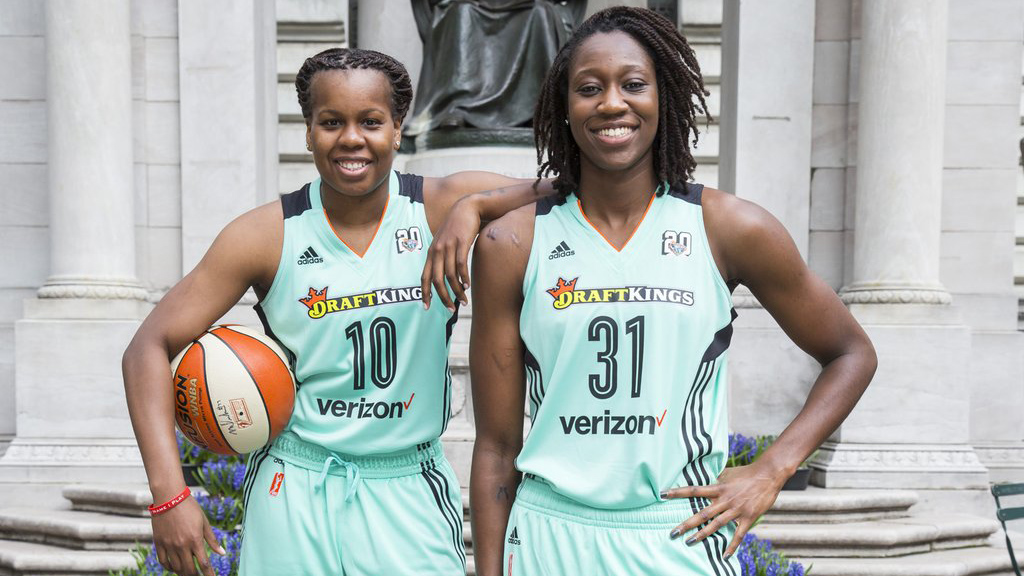 Swingman Jerseys can include Hardwood Classic editions, as well as current WNBA and NBA jersey styles.  WNBA or NBA swingman Jersey will be made up of a sturdy,100% polyester mesh, and will have a 2” drop tail that mimics the jerseys that the players wear on court.

Swingman Jerseys will feature one layered  tackle twill front work mark, player name and numbers, unless they are from the 2015-16 NBA season on wards, in which case they will feature a heat sealed tackle twill front word mark, logo,players name and numbers that more accurately mimics modern jerseys worn by the female and male pro ballers These  elements are heat sealed and breathable that allows a better movement  jersey material feel for increased player comfort, while retaining a high quality appearance .

Swingman Jerseys also have a more athletic cut, with narrower shoulders and a slimmer cut through the body, when compared to a Replica Jersey. This more athletic cut is again truer to what WNBA and NBA players wear on the court.

WNBA or NBA Swingman Jersey normally will cost more than most  replicas.  The jerseys are made with a much  higher quality material and  a higher quality of design and manufacture .

If you consider yourself as a passionate online shopper like myself,Ebay has amazing  deals on the best products.I hoped you enjoyed the Cheap NBA Jerseys-The Replica,Swingman And Authentic Types Of Jerseys article and if you have any  questions and  want to leave a comment or want to leave your own personal review,please leave a comment below .