The Air Jordan 7 originally released in 1992 and was once again designed by Tinker Hatfield. Unlike the previous four models, the 7 did away with the visible Air unit in the heel and “Nike Air” logo on the heel. They featured a Huarache-like neoprene inner bootie and colorful geometric detailing inspired by West African Tribal culture.

Five original colorways of the 7 were released, including the first Olympic-inspired version, which Michael Jordan wore during the 1992 Summer Olympic Games as a part of the “Dream Team.” This pair also featured Jordan’s Olympic number “9” in place of  ‘23’ on the back triangle piece.

The Air Jordan 7 Retro
made its debut in 2002. It was short-lived, as only two colorways were
released. One pair came in the original “Charcoal” colorway, while the
other came in an all-new Retro+ style. This version, the “French Blue” edition, brought the first new colorway to the model since it was originally released and also featured a new leather tongue.

The 7 Retro returned two years later 2004. This one-off release release saw the the original “Olympic” colorway
come back for the first time. In 2006, the 7 Retro would finally get a
full run, with six colorways releasing. The run started off with two
“LS” editions, followed by the return of the original “Cardinal” colorway and an all-new women’s exclusive.

In 2008, the original “Hare” colorway returned as a part of the Jordan 16/7 Collezione “Countdown” Pack. Also releasing that year was a limited “Olympic Celebration” colorway inspired by Joan Miro, a famous Spanish painter.

The following year saw the the 7 release in two colorways for the second “DMP” of the year. Made to commemorate Michael Jordan’s 60+ point game against the Orlando Magic in 1993, the pack included the OG ‘Charcoal’ colorway representing the Bulls, along with a new white, royal and black colorway for the Magic.

For the World Basketball Festival
in 2010, Jordan Brand brought back the “Olympic: Air Jordan 7 Retro for
the second time.

This time, they featured a gold heart-shaped “For The Love Of The Game” logo
embroidered on the heels. Also released in 2010 was an all-new Premio
colorway, which was the third release from Jordan Brand’s “Bin23” Collection.

In 2011, the Air Jordan 7 Retro would have its second full run with four releases. The original “Bordeaux” colorway,
one of the year’s most popular releases, was retroed for the first
time. Additionally, the “Cardinals” saw another re-release, along with
two new colorways, including a “Year of the Rabbit” edition inspired by the Chinese zodiac.

The Air Jordan 7 Retro came back again one year later in 2012 with a
five colorway run. Jordan Brand brought back the “Olympics” for a third
retro, this time true-to-the-OG (sans the “FTLOG” logo on the heels).
Also, two “J2K” editions were released featuring redesigned woven uppers. Paying homage to the 20th Anniversary of the 1992 Summer Olympics, a “Golden Moments” Pack was released, featuring both the Jordan 6 and Jordan 7. The final 7 Retro of the year was the third “Charcoal” re-release.

Jordan Brand colorways were originall mostly in
Chicago Bulls colors used on Air Jordans. Now that Michael Jordan is retired the current NBA Champions has its own pastelle which is in the Toronto Raptors team colors.

Originally making its debut on the Air Jordan 7,
which MJ would wear during road games, the release earned its nickname
“Raptors” due to its similarity to the color scheme of the Toronto
Raptors.

The latest release dropped during the 2019 NBA Finals with the “Raptors” Air Jordan 4 that came with Drake’s signature as a limited edition re-release of the colorway.

It’s hard to choose between both “Raptors”
Air Jordan releases

As seen in
the official photos that have already surfaced, the upcoming
colorway borrows design cues from the beloved “Raptors” Air Jordan 7,
which last released in 2012.

The
kicks come equipped with with the familiar purple and red detailing, as
well as a combination of grey tones on the tongue. Sneakerheads are
surely hoping that Jordan Brand will retro the classic Raptors 7s, but
this patent leather rendition will have to suffice for now.

The patent leather Raptors Air Jordan 7 will be a women’s-exclusive.

The beloved “Raptors” Air Jordan 7 is returning to eBay October 2019 .

Instead
of the familiar nubuck construction, the kicks will come equipped with
glossy, patent leather overlays. As is tradition, the Raptors style 7s
will come loaded with the familiar purple and red detailing, as well
as a combination of grey tones on the tongue. Sneakerheads are surely
hoping that Jordan Brand will retro the classic Raptors 7s, which last
released in 2012, but this version has patent leather material to floss with.

Air Jordan 4 Raptors make its debut in May  2018.Adorned in the Toronto Raptors
colors.,These kicks were actually  intended to be the next Jordan Brand x Drake
release.

This Air Jordan 4 was suppose to have Drake’s name on the tongue with the same theme as Travis Scott’s Air Jordan 4 Houston Oilers
that’s scheduled for June. Both rappers were intended to pay homage to
their home teams using the Air Jordan 4 dressed in their team colors
and artists name on the shoes.

Drake unfortunately teamed up with Adidas.The previous Nike Colloabo release never happened . However we got a retail version of the
“Raptors” Air Jordan 4 minus rap and hip hop mogul Drake

UPDATE: Nike has uploaded Drake’s version of the Air
Jordan 4 “Raptors” which will no longer be releasing. Instead, the
retail pair will not included his signature on the tongues. Insider’s  look at the Drake’s original Air Jordan 4 “Raptors” on the
left with his signature on the tongue. The right side is the Jordan
Brand retail version since Drake is no longer with Nike. The Air Jordan 7 has been relaxing in the shadows since a collaborative Patta iteration released globally back in June, but it’s set to step back into the spotlight this October with a fresh women’s makeup that boasts a brand-new patent leather construction and bright accents. As the AJ7  typically utilizes a smooth nubuck for its base layer, the material  switch-up to a glossy full patent black leather provides a striking  alternate look that’s undeniably bold. The tongue adds two shades of  grey into the mix, and further embellishments are offered by colorful pops of orange and purple on the upper’s branded hits, the heel tab, the midsole’s signature jagged peaks, and the outsole, which also injects asmall dose of maize to complete the look. 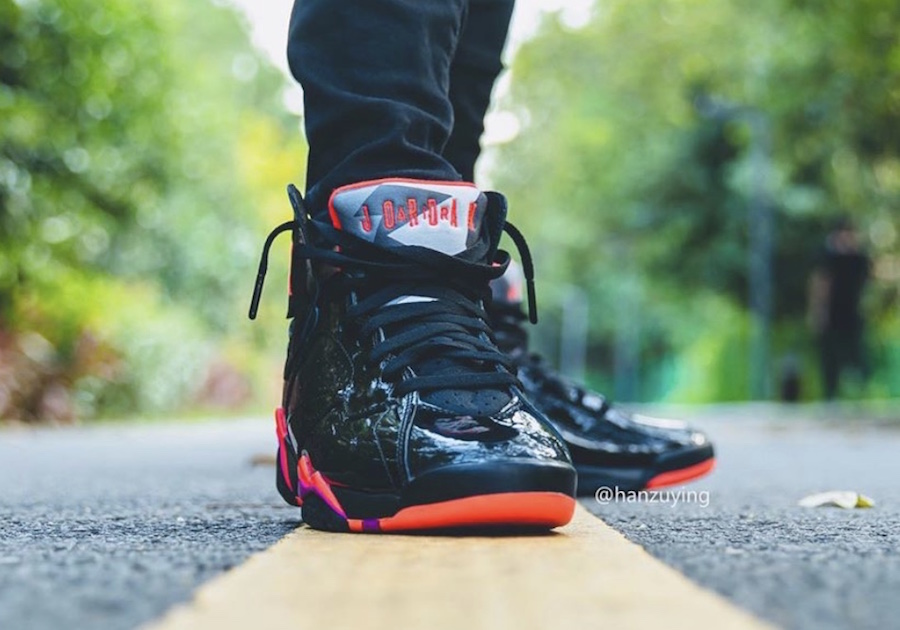 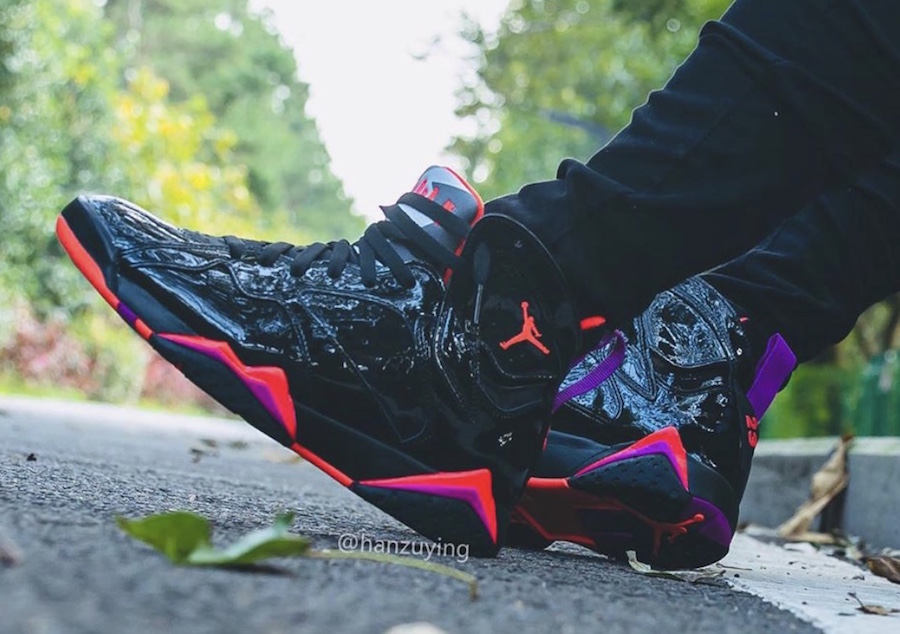 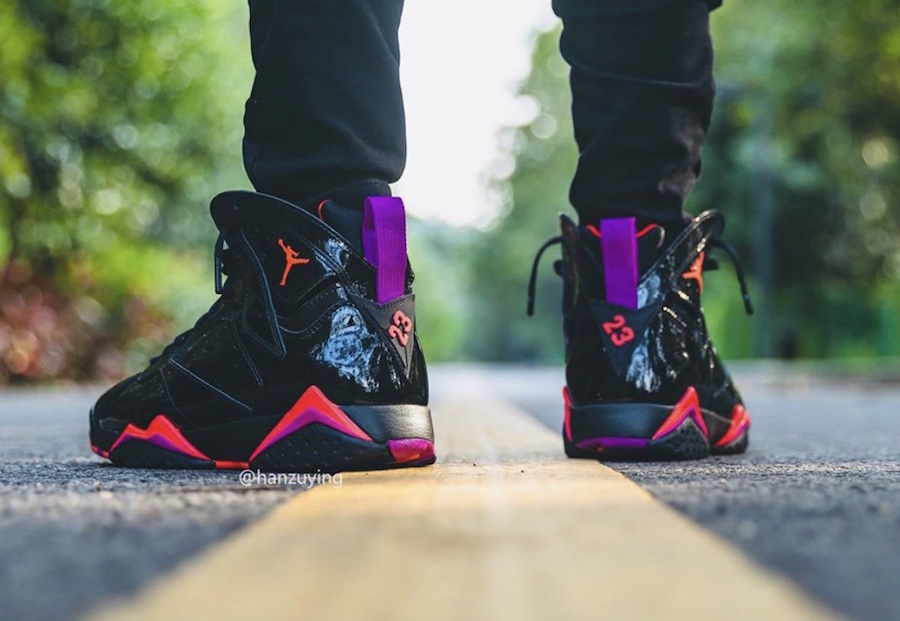 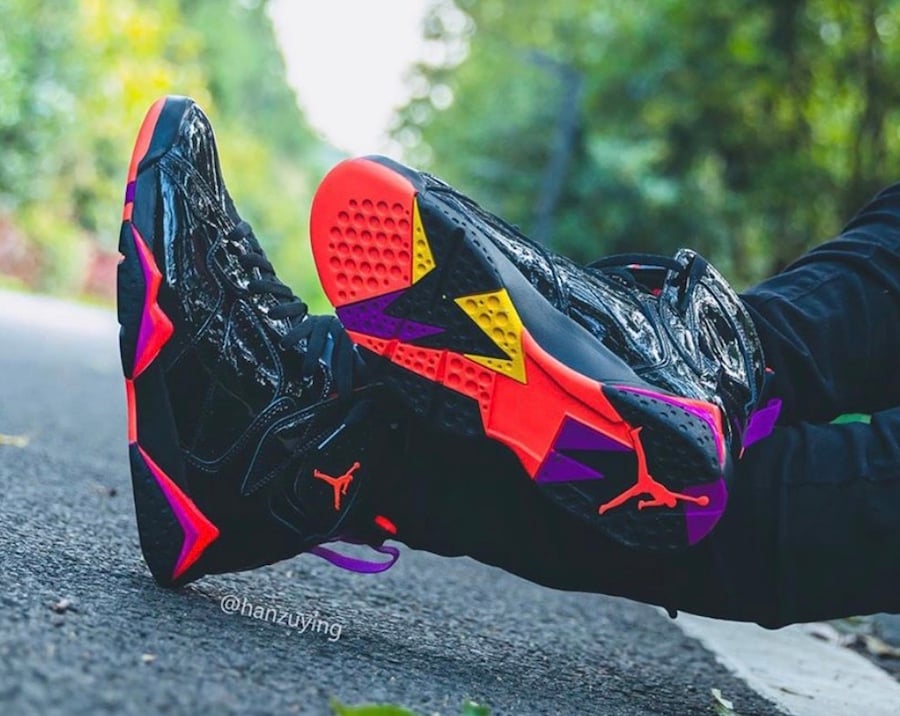 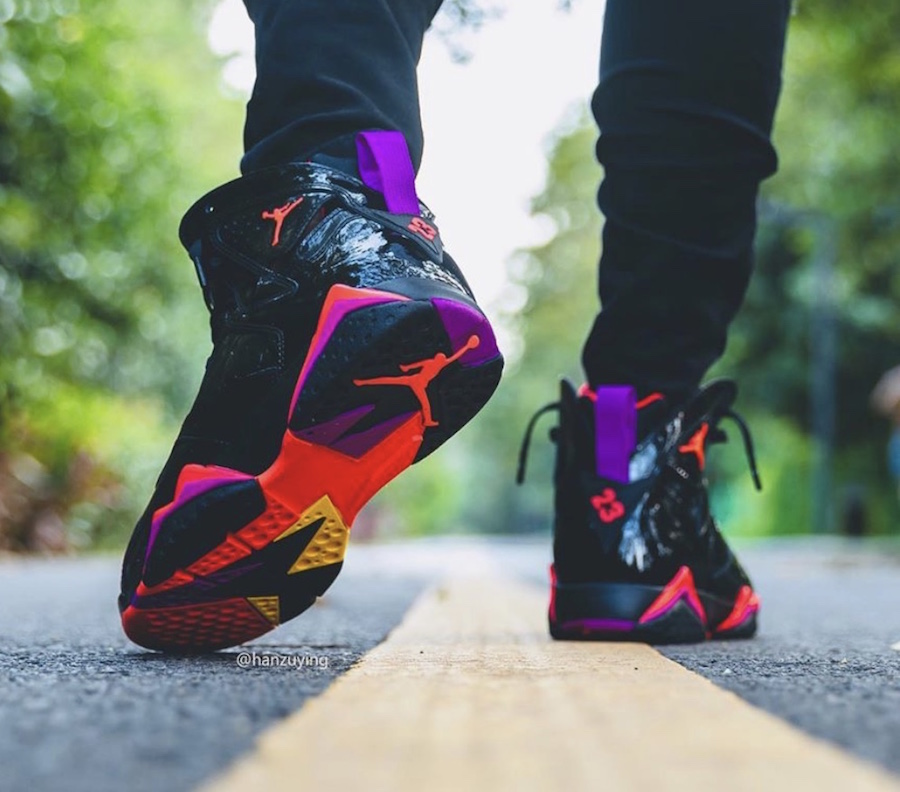 The Air Jordan 7 ‘Black Patent Leather’ is a new women’s release that will launch during the Fall 2019 season.

Looking closer this Air Jordan 7
comes highlighted with Black Patent leather across the upper while both
Orange and Purple detailing is seen on the tongue branding, Jumpman on
the ankle, midsole and heel. Completing the look is accents of Yellow on
the outsole.

You can expect the Air Jordan 7 WMNS ‘Black Patent Leather’ to release at select retailers and online at ,eBay

on October 31st. Retail price is set at $190. Below you can check out more images for a closer look.

If you consider yourself as a passionate online shopper like myself,eBay
has amazing deals on the best products.I hoped you enjoyed the Air Jordan 7-Women’s Only Exclusive Patent Leather Jordan Brand Kicks article and if you have any questions want to leave a
comment or want to leave your own personal review,please leave a
comment below .